Do as they say. Just head up those stairs into the garden. Enough messing around.. For now.

carve cat pictures into the walls as you go

You follow GBM up the stairs. It is a narrow staircase that wraps around to the east and then goes up for 13 z levels. At one point it passes through a cluster of pretty purple crystals. You want to engrave images of cats but you no longer have a tool and you suspect Doren would not stand for it anyways.

GBM says, "Dis is the old Cityshanks. It was sealed off for 150 years until we rediscovered it. Urist The Great's sculpture garden is our current project. King Feb doesn't like it very much but he mostly ignores us."

Doren, "The dwarves like our exotic alcohol to much to stop our operation."

The staircase ends in a narrow tunnel. Several archways are bricked off on either side. You follow the tunnel to an arcade overlooking a sculpture garden somewhere near the top of the mountain.

There are a variety of outdoor crops growing in the corners. An elf woman is busy etching a crappy drawing of an elf and cheese. Another elf is sitting with a large dog. A dwarf paces nearby a rose-gold sculpture of a plump helmet.

As you walk down the steps into the garden the blond elf notices you. Her eyes seem to light up and she stops engraving to speak exceptionally fast.

"Oh, Doren! Who is your little friend? Oh Nature! He is so cute!"

Doren interjects, "Aweme, please. This is my prisoner, not my friend."

"Can I pet your prisoner? HE IS SO ADORABLE! LOOK AT HIS EARS!"

Meanwhile, GBM has approached the other strangers.

Hold on.. Did we just kill someone's doggy? This.. Might not go so well..

Everyone knows bees make buttloads of honey out of nothing. Stuff some live bees in your inventory to bring home and start your own bee colony!
Quote from: Starver on January 01, 1970, 12:01:00 am

Anything that obviously is nailed down (like the statue), make a show of 'being a kobold' and humorously try-but-fail to pick up as briefly pass, so they don't realise that you're this close to grabbing something else.

You do some dodgerolls and look for improvised weapons while Aweme follows you around. You take some bees but they sting you so you put them back.

The others are busy whispering to each other so you try to nab a loose brick. It is too heavy so you try and find something more practical. The fork in the plump helmet statue is shiny and you want it.

"...and Craig disables traps, that's where you come in Bembul.", you overhear GBM say. The dwarf grunts.

You start to get tired and notice a nice sharp rock at your feet! You hide it in your bag.

GBM says something to the elf with the dog. She says, "That sounds do-able. I might have to train a new pup, but it shouldn't be a problem"

"Aweme" GBM says, "Engrave us quick map please." Aweme starts etching away at a smooth part of the wall enthusiastically.

"We are here.", he says and he points at the engraving of a mountain. "Put the Corps of Siege Engineers down here."

"Now Craig, the dwarves in Cityshanks weel keel you on sight. We don't want that so make sure you stay close. We are The Gears of Decency. We may be able to protect you but you weel hef to help us with our QUEST."

Give a dramatic kobold speech in support of the newfound friendship you have discovered.

You clear your throat and say, in kobold, "Greetings The Gears of Decency. I am pleased to join your ranks and will accept your QUEST. Though I may be small, some would say I am a legendary Dodge-Sneak-Roller and, I might add, I am an Adept Engraver."

The elf with the dog says, "Nice" in kobold.

Engrave an image of kitties and doggoes.

The others look at eachother confused. Aweme has nearly finished the map and you see your opportunity to demonstrate your engraving skills. You etch a kitten.

GBM continues, "The Corps Of Seige Engineers were formed to maintain the fortresses traps and other machinery. A growing portion of fortresses funds now go to their top secret !!Science!! experiments. Our research shows that these experiments are responsible for the death of countless innocent creatures. We don't know what they're planning but we do know that top military officers are helping with the cover up. Our mission is to infiltrate the Corps facilities, rescue their test subjects, and expose the corruption that is plaguing this fortress."

The elf with the dog says, "Yes, and save the Fluffy Wamblers. We do know the !!Scientists!! have taken a special interest in Fulffy Wamblers recently. We believe they are using the Fluffy Wambler for some sort of weapon of mass destruction, although, we have no evidence for this.

Three of my war dogs have been requested by the Corps to be delivered in three days. That will put 3 of our allies directly inside. We have until then to do reconnaissance. Your job Craig, is to help us deal with the elaborate defenses around the lab. As a Kobold you would have had years of training at Kobold Academy. Once you get Grizzly Bear Man inside, he and the war dogs will take it from there."

The map is now complete

GBM says, "Aweme and Bembul, help Craig get into Cityshanks. I weel meet you at The Spicy Olive. Craig, get into barrel."

Notice how the cavern there looks like a man lying down? Engrave a face on the engraving of a person lying down. Also, that platinum haired elf is totally into us.

You draw a face on the cavern.

Hey! You're going to risk your life! It must be for something!
Demand the artifact bronze dagger, Tributescar, as a reward when fortress will be captured.

I think it can be only "PLUMPY". So we have 3 more letters.
And if ~ can be carved as italic N, then the door leading to the garden really has an inscription "HIPPIES". Well, there they are.

It's definitely "PLUMPY" in previous inscription. 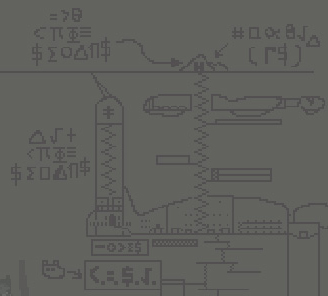 These inscriptions are much better.

the one mentioned in the text: ("We are here.") - at the top on the right side
(i will continue use my transliteration system for now)

+ is definitely W! and inscription above the other door is FORWARD BARRAKS! and Ω is F!
So we lack symbols for J, Q, V, X and Z.

You are now a dabbling reader.

You do a quick sketch of Tributescar and demand it as a reward for your troubles.

The elf with the dog says she has never heard of it before.

"GET THE FUCK IN THE BARREL ALREADY!", Doren says as she shoves you inside.

It smells pleasantly sweet in here.

You hear the dwarf with the goggles mumble "hrggmm grmmm fnnn." and then nothing as the barrel is sealed shut. It is a very sturdy oak barrel. Top notch dwarven craftsmanship.

You quickly become bored and decide to improve the appearance of the barrel using your sharp rock.

Right click on the image and add your own engravings in the image editing software of your choice. Leave room for others to add engravings after you.